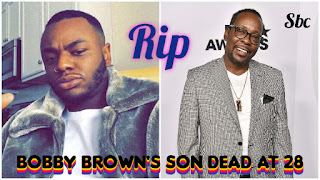 Bobby Brown Jr., the son of singer Bobby Brown, has been found dead at the age of 28, according to TMZ. It is the latest tragedy for Bobby, who lost another child, his daughter with songstress Whitney Houston, tragically.

The entertainment website quoted a “source close to the family” as confirming that Bobby Brown Jr. was found dead on November 18 at his home near Los Angeles. Police don’t believe the death was related to foul play, according to TMZ. The cause of death is not clear.

It’s the latest death of a child to affect Bobby Brown, who lost his daughter Bobbi Kristina at age 22. She was his daughter with singer Whitney Houston; Bobby Brown Jr. was the product of Bobby’s off-and-on relationship with Kim Ward.

Posted by Southside Bosses at 10:24 PM