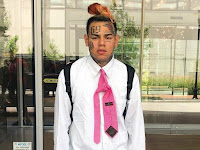 Tyler the Creator and Jaden Smith Gay for each other?

Could Tyler the Creator have been outed by his BF

Tyler the Creator has been a monster at originality since his debut in 2007. He has mainly been known for his weirdom, which was his group Odd Future's whole gimmick. From off the wall lyrics to video of him eating a roach, he has never shied away from being his self.

Which is why it's hard to believe Jaden Smith claiming the rapper as his lifelong boyfriend. The announcement came from the son of Famed Will Smith and Jada Pinkett Smith, at the Camp Flog Gnaw music Festival. Tyler, 27, denied the allegation of rip, signifying with a wagging finger at the crowd his disapproval.

“I just wanna say Tyler, the Creator is the best friend in the world and I love him so f—king much,” Smith said in a video recorded by a fan. “And I wanna tell you guys something. I wanna tell you — Tyler doesn’t wanna say, but Tyler’s my motherf—king boyfriend!”

One thing that can be said is that we know that this is Will Smiths Son...
By Southside Bosses - November 14, 2018 No comments: