Showing posts with the label Melanie Comarcho
Show all 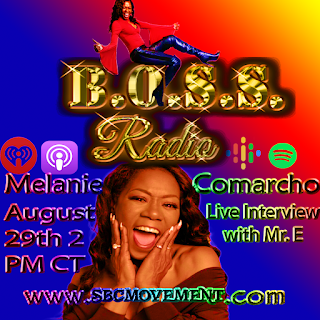 Melanie Comarcho Live On B.O.S.S. RADIO Follow Her NOW!!! Melanie has been traveling the world bringing laughter to peoples lives since the early '90's. Her comedic genius works in ways that differentiates itself from the competition. Winning awards since the beginning of her career, you can tell she was just born to tell jokes and make people feel good. So, it was only right that  B.O.S.S. Radio and Southside Bosses brought her on the show to pick her brain and understand what makes her tick. Where exactly does her jokes come from her and more? (Click Here to tune in Sept. 5th at 2 PM CT) “ Independent Woman ”  Melanie   Comarcho  brings the funny with hilarious observations on the relationships between men and women. Melanie Comarcho was born in  Chicago and raised in Inglewood, California . After high school she entered the Military (Army), and once honorably discharged she returned home. Melanie worked as an assembler/technician at Hu
Post a Comment
Read more
More posts