Showing posts with the label Jah Kooks
Show all 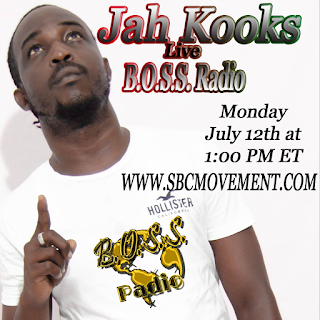 Jah Kooks Live Jah Kooks is a Jamaican musician and performer. He was born on December 21, 1987 as Kenrick Graham and we here at B.O.S.S. Radio were blessed to have him join us by telephone to talk about his music, career, and life. He also tells us the story on how his name was created (very dual personality.) We discussed growing up in Portland Cottage Clarendon, Being inspired first by his school teachers to never give up, to performing in front of a plethora of fans. He broke down the meaning behind is chart topping record "Still A Hold It" and told us about more music in the making. The recording single “Still a hold it” was recorded and released in 2018, Produced by House Of Payne Empire Inc. Recently the song was revamped and has been playing on many radio stations Worldwide giving him a household name in the music industry. So, tune in turn up and zone out as we bring to you Mr. Jah Kooks... https://www.facebook.com/kenrich.graham http://www.houseofpayneempire.com/ ht
Post a Comment
Read more
More posts