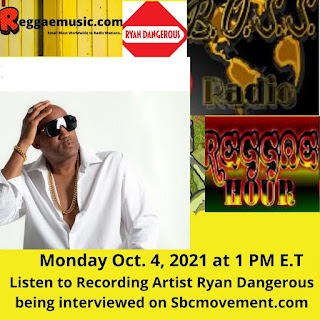 "Women are beautiful people ya know, they're nurturers, and everybody here has a mom..." Baby Run Come by Ryan Dangerous focuses on the internal beauty of the collective woman in an age where objectification is the foundation of a lot of relationships. Daring to battle that dating stigma, Dangerous set out to change the narrative and viewpoint of women in our society. "... this is a female anthem saying that I see you I acknowledge you and I know you stick by us and I appreciate you and it's nothing but love." Ryan seeks to mend this battle of the sexes by applauding all the strong women is his life.
Ryan Dangerous making this his debut track says a lot about the future of this artist. Going against the grain on a debut could arguably be a career ender before it even begins. But, the Reggae scene has welcomed Baby Run Come with open arms as it has Social Media ablaze with snippets of the hook floating around all social media platforms, streams racking up on streaming services and buzz about a video.
Ryan "Dangerous" Smith is a Jamaican born multifaceted visionary and designer, whose talent is evident in his music, fashion, and art. Ryan who plays the drums, trumpet and bass, credits his ability and versatility as a multi-instrumentalist as the catalyst which elevates his ability to compose, ghost write, and produce for several other artists.
Get to know more about Ryan Dangerous in our exclusive interview here on B.O.S.S. Radio.
Read more »
By Southside Bosses - October 05, 2021 No comments: