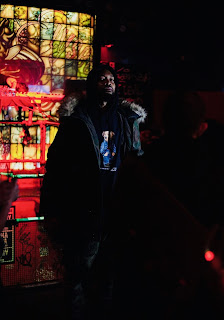 The black and white Akthentik laced visual shows the assassin and the marxman spitting straight gas in the deserted streets of a Covid -19 stricken Los Angeles, California.

Check out the video and stream the single below.

With 10 albums, 2 EP’s, numerous international collaborations, and over 15 years in the music industry, Los Angeles (by way of North Carolina) emcee, ethemadassassin, is the physical embodiment of dedication, perseverance, independent artistry, and hustle.

Debuting as a solo artist in 2004 with the album, “Proverbs,” E followed up with 2008’s, “Tomorrow Never Comes,” and 2013’s, “Soul On Fire,” all of which E executive produced. During those years, E formed the now defunct group, Veteran Assassins and co-executive produced and released the albums, “Veteran Assassins,” in 2010, “Paint The Town Red,” in 2012, and, “G.O.L.D.” in 2016. Each of these albums, along with 10 Top 10 charting singles on Rap Attack Lives and Rap Network charts (USA and Canada), numerous guest appearances, a video on MTVBase (“Walk My Shoes” off 2008’s, “Tomorrow Never Comes”), videos on Ralph McDaniels’ Video Music Box (“Walk My Shoes,” “Lemme In,” off Veteran Assassins’ 2016 release, “G.O.L.D,” and “Spoiler Alert,” off “Bear Handz 2: Bear Market”), and international festival appearances (New Skool Rules, Rotterdam NL, Hip Hop Sonic, Groningen NL, Midem, Cannes Fr, StreetKrush, Gorinchem, NL) have garnered international recognition, acclaim, and praise and helped catapult ethemadassassin into position as an underground stalwart with a towering stage presence with a lyrical ability to produce uber-vivid depictions of the realities of his way of life.

Following the hostile breakup of Veteran Assassins, ethemadassassin re-emerged as a solo artist marked by an eventful 2018, dropping an EP, “Motivations” with Luse Kanz, produced by THE WDSMN, and his 4th and 5th solo albums, “Bear Handz: Magmatic” produced by QuakeMobb and, “Bear Handz 2: Bear Market,” produced by Nazar.

ethemadassassin started 2019 off with a super bang, releasing his 5th solo album, “Bear Handz 3: Animal House,” produced by ShortFuZe with features from Celinski The Mayor, J.Bond (of Illpo), O.G. Bobby Ne’gro, Pisto Pop, Sneek Rothstein, and Luse Kanz. E also made his mark in the music production world as he helped BMG Production Music earn the 2019 Mark Award for “Best Hip-Hop/R&B/Urban Track,” as lead writer and solo vocalist for Selectracks Song Catalog’s, ‘Stand Up (Put Our Fists Up)’ with Josh Mobley and Moria Denson (aka Jimi James).

In March 2020, ethemadassassin released, “Chain Reaction,” a collaborative EP with Los Angeles producer/emcee Diar Lansky. In September 2020, E released “Bear Handz 4: Dark Side Of The Mountain,” which features the singles, “Children Of The Night,” “Don’t Mix Ya Dishes,” and “10.” BH4 is produced entirely by Swedish boombap producer, Twelvebit.

On January 5, 2021, E is coming right back with the next Bear Handz installment, “Bear Handz 5: Gram Newton” produced by Akthentik, with appearances from Hus Kingpin, Supreme Cerebral, and XP The Marxman.

stay posted, as the story adds on…