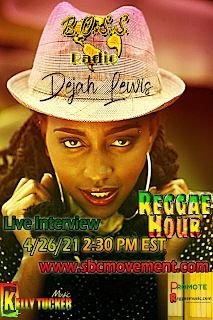 Denette Lewis aka Dejah Lewis was born on May 3, 1986, in Kingston Jamaica where she spent half of her childhood days in Clarendon and also where she first started singing at the age of 3 in church. She then moved back into Kingston at age 8, where she began to sing with her sister Noreta Lewis who at that time had won the JCDC Gospel Festival 2000 while she was attending the Kingston Technical High School. In school she began to enter into various school competitions such the JCDC School Festival where she receive a gold and several other medals for winning the singing competition. After finishing school, she started doing music full time, where she started working with gospel artist such as her sister Noreta Lewis, Goody Goody, Jai and Judy Mowatt. Shortly after working 10 years within the gospel music industry, she then began touring in Europe with Alborosie, Beres Hammond, Queen Ifrica, Tony Rebel, Mr Vegas, Junior Kelly, Natural Black, Sizzla, I-Octane and Tessanne Chin. She then launched on her own from being a bonafide backup singer with several successful track releases on I-Tunes and Spotify. Currently Dejah is working with Kelly Tucker Music on different solo projects and is now projected in releasing her first single "Come on Home" by Spring of 2021.

https://www.instagram.com/dreal_dejah/
Posted by Southside Bosses at 1:51 AM