Come Take Our Survey And Tell Us How We Do Better!!! 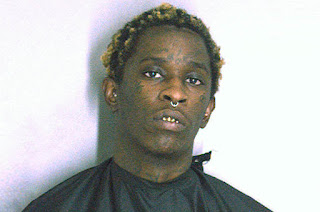 ATLANTA - The Atlanta rapper Young Thug was one of 28 people indicted Monday in Georgia on conspiracy to violate the state's RICO act and street gang charges, according to jail records.

The Atlanta rapper, whose name is Jeffrey Lamar Williams, was arrested at his home in Buckhead, an Atlanta neighbourhood just north of downtown. He is being held at the Fulton County Jail.The conspiracy charge dates back to 2013 and the gang charge to 2018, the jail record says.

Young Thug is allegedly one of three founders of the Young Slime Life, "a criminal street gang that started in late 2012" in Atlanta, the indictment says. YSL is affiliated with the national Bloods gang, officials said. Charges include "Preserving, protecting and enhancing the reputation, power and territory of the enterprise through acts of racketeering activity including murder, assault and threats of violence."

Young Thug's lawyer Brian Steel told local media that, "Mr. Williams committed no crime whatsoever" and that he would "fight till his last drop of blood to clear him."

He will make his first court appearance on Tuesday at 11:30 a.m.

Also indicted on Monday were Atlanta rapper Gunna, whose real name is Sergio Kitchens, and aspiring rapper Christian Eppinger, who was already in jail, accused of shooting an Atlanta Police officer six times in February. It was not immediately known if Gunna, who is accused of conspiracy to violate the state's RICO act, has been arrested.

In April 2021 Young Thug and Gunna posted bail for 30 low-level inmates who were unable to afford the costs themselves.

Young Thug's record label has been called YSL Records or Young Stoner Life Records. The label refers to its artists as part of the "Slime Family," and a compilation album called "Slime Language 2" hit No. 1 on the charts in April 2021.

Enter for your chance to win your dad a real handy gift box
Mothers Day may be passing soon, but, that doesn't mean you can't still get her a beautiful Gift Box to show how much you love the woman that brought you into this world.
But don't forget, Fathers Day is right around the corner and YOU BET' NOT GET US ANOTHER D@** NECKTIE, thank you sincerely Every Dad ever in existence.
Our Men's Gift Boxes include an all-Natural Beard/Hair Oil, Beard Balm both made with Babassu oil, Organic Cherry Kernel Oil, Black Jamaican Castor Oil, and Vitamin E Oil. Great at making your hair full, healthy, and shiny. It also contains Real African black Soap and a Fragrance oil of your choice.
You can win one this month and have it shipped to the Father of your choice making a splash on Fathers Day, putting some pizazz back into a day that has been underdone for decades.
"How Do I Win?" I hear you and will be happy to answer that question.
On Tik Tok, Facebook, or Instagram, Post a picture of you and your father. Make it pop. Add music, effects whatever you need for your picture to tell the story of your dad. Post it to one of three or all three Social Media Sites with the Hashtag #WinDadAGiftBox. Don't forget to share and get your family and friends to like your posts. The posts with the most likes will win in the end. We will only count one profile meaning we will not combine Instagram Likes with Tik Tok likes. This contest will begin Saturday May 7th, 2022 at 8 A.M. and last until Tuesday June 13th, 2022 at 11 PM CT.
https://vm.tiktok.com/TTPdgkoSvx/
By Southside Bosses - May 10, 2022